Can Lifting Weights Help with Anxiety and Depression?

Training Your Body to Retrain Your Mind

The amazing symbiotic connection between our minds and our bodies is something that has been accepted for millennia. Since at least the Victorian Era, based on anecdotal evidence doctors have  advocated exercises of various sorts to help with mental issues like memory loss, mood disorders, and anxiety. However, until recently actual scientific evidence supporting the theory of this interconnectivity has been fairly hard to come by. The studies that have been conducted focused almost exclusively on aerobic exercises like jogging.

Doctors and scientists long ago proved the positive connection between aerobic exercise (like running and swimming) and anxiety levels. However, weightlifting is a different type of exercise altogether.

Indeed, resistance exercise training (or RET as professionals call it) is anaerobic—meaning “without oxygen.” That, of course, doesn’t mean you stop breathing. It means that because you’re using muscles in such an immediate fashion—doing squats or deadlifts—that they don’t have time to pull oxygen from your bloodstream to fuel the exertion. Instead, they rely on the meager stores of energy already available inside the muscle.

That’s why you may be able to run on the treadmill for 30 minutes without trouble but you may only be able to squeak out 10 repetitions when bench pressing even moderate weight.

Does weightlifting really have positive effects on anxiety and depression?

One recent study published in The Journal of Sports Medicine surveyed existing studies on exercise in an attempt to correlate positive mental effects, specifically with RET. The results strongly suggest that RET “significantly improves anxiety symptoms among both healthy participants and participants with a physical or mental illness.”

Anxiety is one thing. What about depression?

A newer meta-study published in The Journal of American Medicine looked at 1,877 participants who had participated in 33 clinical trials in the recent past. Again, the results were very clear that resistance exercise training (like weightlifting) had a marked positive effect on self-reported depressive symptoms. The authors of this study even hint that RET could have a preventative effect on depression.

Surprisingly, researchers discovered that neither the total volume of RET nor the participant’s overall health impacted the level of effectiveness (measured by improved depressive symptoms). This suggests that moderate amounts of anaerobic exercise can have a similar effect on depression as elevated amounts.

Why does weight training work to help improve mood? That’s one question recent studies haven’t been able to answer. In aerobic exercises (like running) scientific research shows that the release of chemicals (such as hormones) during and after exercise has a beneficial effect on mood regulation. However, no such chemical analysis has yet been done to uncover a link between anaerobic exercise and body chemistry.

Regardless of the Missing “Mechanism”, Weightlifting Works 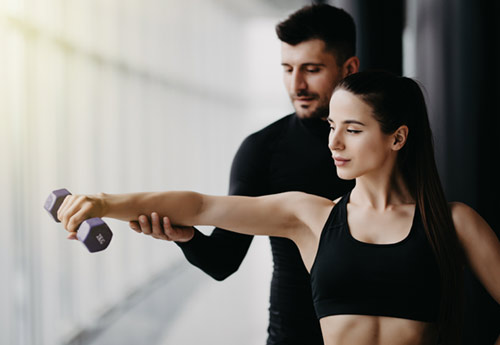 Thankfully, you don’t have to know how something works in order to enjoy the benefits

Scott Barry Kaufman, a cognitive psychologist who suffers from repeated bouts of generalized anxiety disorder, shares “something about the physical exertion really lifts my mood. The longer-term effect is that weightlifting makes me feel empowered, confident, and ready to take on any challenge there may be the rest of the day.”

Kory Stotesbery, a psychiatrist in San Francisco, noticed some patterns of improvement with depressed patients who seem to be consistently in a state of “I can’t” showing signs of “I can” after weightlifting.

So, don’t be afraid to try something new. Give weightlifting a try.

New to Weightlifting? No Problem!

Most gyms have basic training courses, personal trainers, or at least someone who knows how to use weightlifting equipment properly who can show you how to get started. Unlike aerobic exercises, the key to successful weight training isn’t piling on the weights and pushing your limits. It’s proper form and activation of the correct muscle groups at the right time. That means even if you’ve never lifted before, you can start with the lightest weights available and still benefit.

Local gym closed? Ours too. Lucky for all of us there’s YouTube. This muscle strengthening 20 minute full body workout is one you can do at home and with no equipment.

In addition, adding weightlifting to your existing exercise routine will help you break through monotony and continue to add new and exciting challenges to your wellness journey!